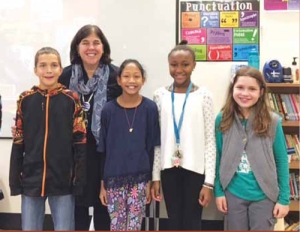 Olá is a two-way Portuguese–English bilingual immersion program located at the King Open School. Olá follows the district’s curriculum and students learn the content in English and in Portuguese daily.

Developing the ability to read, speak, and write in a new language is a source of great pride for our Olá students. In the beginning, they rely heavily on pictures and body language to understand what their teachers are telling them. Through songs, games, and positive interactions in the classroom they rapidly develop skills in both languages.

Olá teachers cover the same curriculum as the rest of the King Open School, and students are a welcome part of the wider school community. Hands-on projects are integrated into the curriculum of each grade level, and field trips connect students to the rich local Portuguese-speaking community.

Our son’s teachers have been incredible: warm, supportive, and always going the extra mile to help support his learning.
—Andrea Sherbakov

Olá has broadened my children’s view of themselves from simply Americans or even Bostonians to citizens of the world and part of a greater world community.
—Jeni Pereira

Our son is proficient in English and Portuguese. When we take him to Brazil, none of the children who play with him in the park can tell that he was not born there.
—Robson and Jennifer Goulart

My daughter began to enjoy reading novels in Portuguese and to fully understand what was written by the fifth grade. Her younger sister is following her footsteps now. They are learning open mindedness towards diverse cultures by being nurtured in the Olá Program.
—Kumi Okabe

Diversity in Olá is not just taught, it is a learned experience.
—Jill McCain Santiago

Want to talk to a parent who currently has children in the Olá Program? Contact Jaime d’Almeida.